In this 7 weeks project, I have learned about Filming and Acting. This project my facilitators come from LA and I have two facilitators. For the first week, I get to know them clearly. After the first week, I got to learn about Filming for two weeks then I switch to learn more about acting and after I learned all about this basic thing, people in my project start to create a film. Acting is fun but sometimes it’s really stressful, we have to memorize the line for our play, practice and practice a lot.  I have made a photo-roman it’s a video that has no speaking and it has to be 2 to 3 minutes and tell a story. Take a look at our film.

Liger Leadership Academy students are English Language Learners. They have been immersed in English since arriving at Liger, We pride ourselves on prioritizing process over product. Please excuse any English errors as part of the learning continuum our students have taken over the years. 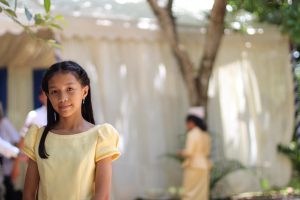 Hello, My name is Sreyroth and I am 14 years old. I am a Junior Student at Liger Leadership Academy Located in Phnom Penh. I was born in 2005 at Kampong Cham. When I was born for 1 year My family moved to Phnom Penh. This is my Third years learn at Liger, When I started to Learn at liger, I like to play with other people that come from other provinces. On weekend I like watching Youtube, Learn to dance Khmer dance and reading and Sometimes I go to my home. My favorite Essential is math and Khmer. When I have free time I like to draw, Listen to Music, Reading, Playing Sports and Writing story or poem. Mostly on Sunday at about 3 Pm me and my friends use to play frisbee. first of all, I don’t really like to play frisbee but when I try one to play it I feel so happy that why frisbee become my favorite sport. Sometimes I stay alone to relax because it can make me happy too. Before I came to Liger I don’t even know anything about English, But after I learn for 3 years now I know much more English, In the Future I want to be a teacher because I can help people in Cambodia to learn and  like to teach kids about what I have learned, If can I will come and be a teacher in Liger, I really love myself because I never think that I have this day.